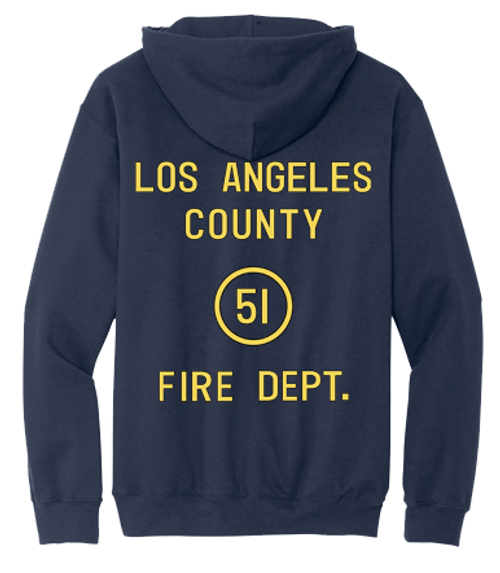 The LACo Fire Foundation is proud to present the offical Zipper Hooded Sweatshirt of LACoFD Station 51. Station 51 was once the name of the fictional firehouse in the TV Series EMERGENCY!, on NBC from 1972-1977.

The image on the back of the shirt was recreated for this apparel by an LACo Fire Department employee for this special station house offering. It is an exact replica of the text that appears on the side of Station 51's Paramedic Rescue Squad and Engine. This is the the same apparel worn by Station 51 firefighters & staff.

On the front left chest is the 51 helmet sheild logo, circa 1970s and as seen worn by the actors on the TV show. This is now an official logo for the station house. It should be noted that some of the actors were actual LACoFD firefighers!

Inventory Status:
Most sizes are always in stock and shipping daily!