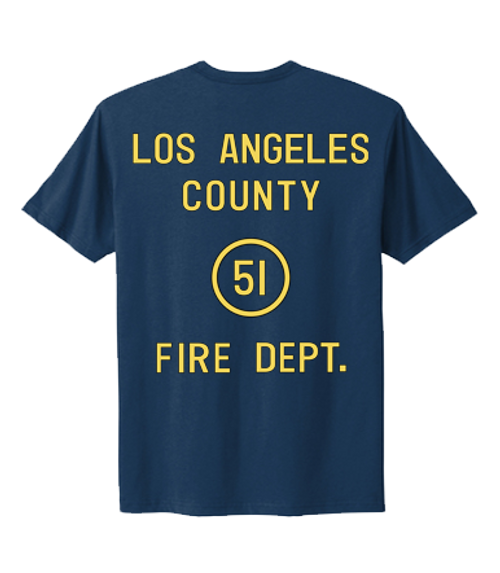 The LACo Fire Foundation is proud to present the offical shirt of LACoFD Station 51. Station 51 was once the name of the fictional firehouse in the TV Series EMERGENCY!, on NBC from 1972-1977.

The series exteriors were actually filmed at Station 127 in the City of Carson. The real Station 51 was added in 1994, replacing Station 60 on the back lot of Universal Studios in Hollywood, CA as a homage to the TV series. Until now, that was only place where you could get official Station 51 souviners.

The image on the back of the shirt was recreated for this apparel by an LACo Fire Department employee for this special offering. It is an exact replica of the text that appears on the side of Station 51's Paramedic Rescue Squad and Engine. This is the the same shirt worn by current Station 51 firefighters & staff.

On the front left chest is the classic 51 helmet sheild logo, circa 1970s and as seen worn by the actors on the TV show. It should be noted that some of the actors were actual LACoFD firefighters!

Printed on a high quality t-shirt, this is a must have for fans of the original TV show, or anyone wanting to show their support for the LACoFD Foundation and the firefighters it supports every day.

Inventory Status:
Shirts are in stock and shipping daily.

JG Board Shorts - Past Logo